“Roe has fallen, and it is time to fight.” Bucks County youth have already answered the call.

Echoes of the call for abortion justice filled the quaint streets of Doylestown Saturday.

It was 4 p.m. when the “Bans Off Our Bodies” protest began, the event led by two local organizations: Bucks Liberation Coalition (BLC) and Youth4Unity (Y4U). Both are entirely student run and lead, with most organizers still in high school. The groups explained that the recent overturning of Roe v. Wade motivated them to take action.

“As a student, many of us have little to no power over our politicians’ decisions, since we are unable to vote. However, after being disheartened and outraged by the news of the Supreme Court, change needed to be made somehow,” said Iman Azeez, BLC and Y4U Organizer, and Council Rock South student. “After convening, Youth4Unity and Bucks Liberation Coalition decided the best way we could voice our power was to hold a protest regarding the Supreme Court’s cruel decision.”

People quickly gathered around the old courthouse, toting abortion rights signs, open minds, and open hearts. Tables were spread across the lawn, representing the organizations that planned the protest or were there in solidarity. In addition to Bucks Liberation Coalition and Youth 4 Unity tables, the New Pennsylvania Project was registering voters and Rise Up Doylestown had stickers and buttons for sale as a fundraiser for the NAACP.

By the time the event started, over 50 people showed; by the time the event ended, 150-200. The crowd was diverse, yet all united by their support for abortion justice. There were speakers, including passionate students and organizers, people sharing their own abortion stories, and local representatives and candidates.

Student organizers were both articulate and passionate as they talked about abortion justice. BLC Founder, Y4U Organizer, and Pennridge High School student Annika Verma was one of the students who took to the podium. She read an excerpt of beloved activist and poet Audre Lord’s powerful speech “The Uses of Anger: Women Responding to Racism.” Lorde read this as part of a presentation at the 1981 National Women’s Studies Association Conference. Although somewhat long ago, its message is still poignant today:

“I am not free while any woman is unfree, even when her shackles are very different from my own. And I am not free as long as one person of color remains chained. Nor is any one of you.”

Sarah Zhang, student activist, co-founder of Y4U, campaign organizer for Ehasz for Congress, and UNC Chapel Hill student, spoke directly to local representative Brian Fitzpatrick. She discussed how when she was first introduced to the world of politics, she thought that it was great that her congressional district was represented by a moderate who would look out for all. This tune quickly changed as she condemned Fitzpatrick’s anti-abortion stance.

“You stole away half of your district’s right to choose, and in doing so, you hurt all of us,” said Zhang.

PA State Senator Steve Santarsiero discussed his concerns regarding the Pennsylvania Senate’s decision to amend the state Constitution, along with Republicans’ goal for the state Constitution to grant no rights surrounding abortion. Santarsiero ended his speech with a call to action: “We have to have faith, it can happen [securing abortion rights in Pennsylvania ]…but we have to get out and vote.”

Democratic congressional candidate Ashley Ehasz was up next. Ehasz talked about her experience of growing up with a single mother, and having a mother who was also raised by a single mother. She was quick to call out Rep. Fitzpatrick for his misdeeds against the community.

“Let me spell it out for you. Brian voted against codifying Roe v. Wade at the federal level this past fall, vowed to defund Planned Parenthood, and he has supported legislation that would restrict access to abortions in the case of a mother’s life being under threat and in most cases of rape and incest. He is no ally,” said Ehasz.

She later added, “Right now, we have a congressman who willfully sold out every woman, young girl, anyone who is capable of having a child in this community, simply to try to hold on to his seat in November.”

It was clear that the crowd appreciated and acknowledged her words.

Two local candidates, Gwen Stoltz (for state representative of the 143rd district) and Tim Brennan (Doylestown Borough Council Member and candidate for the 29th district), both gave speeches regarding their unwavering support for abortion justice.

Some talked about how they felt when they heard that Roe was overturned, others shared their personal experiences with abortion. Anusha Viswanathan, a pediatric infectious disease specialist, mother of two, and resident of Central Bucks, talked about her experience with abortion. The crowd was quiet and attentive as she recounted the hard decision she had to make in regards to her growth restricted pregnancy. She ended her speech with a declaration, “Roe has fallen, and it is time to fight.” Her powerful call to action brought tears and cheers of support. Every word read was painfully beautiful.

As the speaker portion of the protest ended, a large group gathered in front of the old courthouse for chants and songs. In the end, Saturday was a reminder. A reminder that young people are so tirelessly fighting to secure rights that they should already have. A reminder to myself that these young people – my beautiful friends – grant me more hope than any politician ever will. A reminder that in the darkest hour, under the gray cloud that is Harrisburg, community will always overcome. 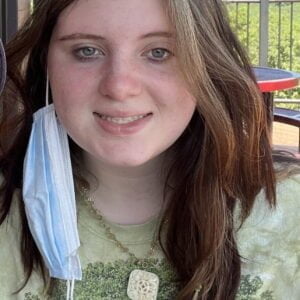 Alexandra Coffey is an activist and organizer with both Bucks Liberation Coalition and Youth4Unity. She is a rising junior at CB West.
PrevOur Movement
Former Oath Keeper reveals racist, antisemitic beliefs of white nationalist group – and their plans to start a civil warNext