Given that white nationalists and Christian nationalists worked together on “Stop the Steal,” it is probably safe to assume that they are still working with each other and with Trump in pursuit of their shared objective: toppling American democracy.

“I’d like to reactivate what Colonel Joshua Lawrence Chamberlain [who fought for the Union in the Civil war] is now handing off to Colonel Doug Mastriano – which is the importance of rallying a remnant, for the sake of an indispensable victory, in the intense heat of battle,” bellowed a middle aged man from the stage of a Sept. 16 rally for Mastriano, the Pennsylvania GOP’s gubernatorial candidate.

“And we’ll do that by putting our right hand up in the air, on the count of 3. If you’re willing to do this,” the man prodded.

The audience then “raised their hands – exactly as German fascists would have done in the 1930s at a Nazi rally,” as observed by religious extremism researcher Bruce Wilson.

The man continued, “can you say what they said at Gettysburg – ‘when you see us lined up, as one, sweep down the hill to victory.’ On the count of three we’ll bring our hand down as one. Father, I pray that, indeed, Pennsylvania will be like Little Round Top, and America will have a new birth of liberty. As one, on the count of three. One, two, three.”

“’As one!’, roared the crowd, sweeping their arms downward,” as reported by Wilson.

The man directing this spectacle was Lance Wallnau, an apostle in the New Apostolic Reformation (NAR). Below is a photo of Mastriano and Wallnau from the Pennsylvania rally on Sept 16, 2022.

The NAR is a politically connected and dangerously influential Christian theocratic movement that teaches dominionism, the belief that Christians have a mandate from God to control the world.

In August, the Beacon reported on the NAR, dominionism, the Seven Mountains mandate, and Wallnau himself in detail. About a week ago, the Beacon reported on Wallnau’s support of America’s Black Robe Regiment (Regiment), a NAR-affiliated militant group that partnered with the Oathkeepers in 2021. Next month, with the assistance of disgraced retired Lieutenant General Michael Flynn, the Regiment plans to commission new members into its ranks in Pennsylvania.

The NAR often uses the language of war to describe its strategy for satisfying the Seven Mountains mandate. In 2013, for example, Wallnau and Bill Johnson of the Bethel megachurch in Redding, California co-authored a book, Invading Babylon: the 7 Mountains Mandate. In it, they state that the “seven realms of society … must come under the influence of the King and his Kingdom. For that to happen, we, as citizens of the Kingdom, must invade.” (Italics added.)

In May 2021, while delivering a sermon at the Oasis church in Ohio, Wallnau coaxed the congregation into giving the same salute and battlecry that caused a stir during Pennsylvania’s rally last week. The Oasis is run by NAR apostle Tim Sheets who recently prophesied that, “The end is near for the Left. America shall be saved.”

While preaching at Sheets’s church, Wallnau invoked war imagery from the movie Gladiator as he instructed the congregation to raise their hands in the air and then abruptly drop them while shouting, “As one!” He explained that he had appropriated the battle cry from Gladiator.

In Dec. 2020, during the pro-Trump Jericho March (“Hear the Church Roar!” rally) in Washington, D.C., Wallnau had persuaded the audience to do the same thing, as reported by Twitter researcher @natedog155. And in 2018, Wallnau had published a video showing the specific scenes from the movie Gladiator that had inspired the salute and battlecry.

Wallnau apparently sees a parallel between these scenes and his belief that he and other christo-fascists don’t need a majority to replace American democracy with a theocracy. Instead, they can get it done with a sufficient minority of people working together “as one.”

Michael Flynn, who has joined forces with the NAR and the Regiment, seems to share this strategic belief, as demonstrated by his call for Christian extremists of different denominations to band together to force a “Christian awakening” onto the U.S.

This is also how the so-called “Stop the Steal” campaign tried to overturn the 2020 election result. As ProPublica reported last year, Stop the Steal organizer Ali Alexander made clear that, in order to draw large crowds, the campaign would “collaborate with anyone who supported its cause, no matter how extreme their views.” During a Dec. 2020 livestream, Alexander specifically stated that, “We’re willing to work with racists.”

He meant what he said. In the runup to Jan. 6, white nationalist Nick Fuentes appeared alongside Alexander and Alex Jones (another Stop the Steal leader) at Stop the Steal events. He also spoke at all three Stop the Steal rallies in DC.

Fuentes is infamous for, among other things, comparing the Holocaust to “baking cookies” and stating that, “All I want is revenge against my enemies and a total Aryan victory.”

Fuentes has also said that he wants a “Christian nation” and that influential Jews in the media “are not really gung-ho about that.”

Mastriano spoke during the Jericho March rally too. As we reported in June, Mastriano also spread one of the most viral falsehoods of the 2020 election. Some of his supporters later encouraged and engaged in violence during the siege on the U.S. Capitol on Jan. 6, 2021.

Given the MAGA movement’s alliance with racists, some people have drawn parallels between the recent Mastriano rally salutes (induced by Wallnau) and Nazi salutes. In response to one such remark, Wallnau tweeted, “Typical leftist lies on what happens at a Republican event. I should know, I’m the one on the stage. I had the crowd raise their hand and bring it down “as one” to commemorate day 2 Little Round-top at battle of Gettysburg. Nazi? You putz, I’m part Jewish!”

Wallnau’s “part Jewish” defense wasn’t wasn’t as compelling as he seemed to think. Milo Yiannapoulos, a MAGA “provocateur,” says he is “part Jewish” too. But that didn’t stop him from going out of his way to normalize “alt-right” leader Richard Spencer while working for Steve Bannon at Breitbart News in 2016. Remember how that turned out?

Greene appeared as a guest on Wallnau’s show in August this year and again on or about Sept. 14 (a few days before the Sept. 16 Mastriano rally).

In July this year, Wallnau and NAR apostle Dutch Sheets (Tim Sheets’s brother) prayed over Greene during a Christian revival event in Georgia.

During the same event, as we reported in August, Wallnau and Sheets recited a blood chilling “decree,” which stated in part that, “our judicial system will issue rulings that are biblical and constitutional,” and that “we take back and permanently control positions of influence and leadership in each of the ‘Seven Mountains.’”

About five months earlier, Greene had attended a conference hosted by rabid anti-Semite Nick Fuentes. It was Milo who had arranged for Greene’s presence at the conference, according to Fuentes. (Link to tweet.)

Below are some of the “special guests” who were slated to attend the same conference. Baked Alaska (shown in the second image, below) is a Breitbart alum like Milo.

Working for Greene is a step up for Milo who fell on hard times after appearing to defend sex between 13 year old boys and older men during an infamous radio show appearance that went viral in early 2017.

In the wake of this scandal, Wallnau “claimed Milo for Jesus and prophesied that he will soon be leading campus revivals, as reported by Right Wing Watch.

Milo’s current boss, Marjorie Taylor Greene, appeared as a guest on Wallnau’s show on Sept. 14 this year. Wallnau spoke during Mastriano’s rally on Sept 16 and then Greene spoke during a Trump rally in Ohio on Sept. 17.

Many of those who attended the Ohio Trump rally, including at times Greene herself, raised their hands in the air, but with one finger pointing.

As with the Gladiator/Wallnau salutes, some people equated these index-finger salutes with Nazi salutes.

Others, including the New York Times, speculated that the gestures related to the QAnon movement’s slogan, “Where we go one, we go all” (which is curiously similar to the “As one!” slogan that Wallnau got from Gladiator).

QAnon is a conspiracy theory movement which the Department of Justice has classified as a potential domestic terrorism threat. Trump recently wore a Q lapel pin and posted a QAnon-themed video, suggesting that he has decided to promote the movement. A song that was played during the Ohio rally apparently resembled a QAnon song.

On the other hand, QAnon followers had not been known to use finger salutes before the rally. Thus, “if it’s a Q thing it’s new,” according to Daily Beast reporter Will Sommer.

Meanwhile, video journalist and filmmaker Sandi Bachom says that she has seen the index-finger salute at Solid Rock megachurch in Ohio. Solid Rock is run by pastors Darlene and Lawrence Bishop, a mother-and-son duo.

Cain has also worked with NAR apostles Dutch Sheets and Cindy Jacobs. In 2019, the three of them launched a Governmental Prayer Initiative called One Voice Prayer Movement (Movement). The Movement’s goal, per its website, was to “pray for God’s values to be expressed through government and the nation,” as reported by Charisma News (which, by the way, sponsors Michael Flynn’s multi-state Reawaken America Tour).

During the Movement’s first call, Cain declared that, “Any persons, entities that are aligned against the president will be exposed and dealt with and overturned by the superior blood of Jesus,” adding, “we come against the strongmen, especially Jezebel, that which would operate in sorcery and witchcraft…”

Cain has also promoted the Seven Mountains mandate with Wallnau. Like Cain, Wallnau thinks that witches are real. In 2017, he claimed that witches were cursing Trump. And in 2018, he said that “70 witches” were “casting spells on Kavanaugh.”

As for Solid Rock, it has gained infamy for demonizing and mocking the LGBTQ+ community and defying coronavirus stay-at-home recommendations. Trump held a rally there in March 2020.

That month, during a live stream of one of its services, Rev. Lawrence Bishop stated that, “those concerned with the public’s health would be better served protesting outside Planned Parenthood locations instead.” Later that year, Pastor Darlene Bishop’s husband nearly died from coronavirus complications.

In 2019, a giant lightning bolt had destroyed a massive statue outside the Bishops’ church. Had this happened to a Planned Parenthood, they probably would have called it a rebuke from God.

During the March 2020 Evangelicals for Trump event hosted by Solid Rock, some of the guests raised their hands with open palms and spread fingers. But others pointed their fingers in the air, as observed by Bachom who filmed the event.

Fuentes and his America First movement, however, use an index-finger salute too. And Fuentes seems eager to take credit for the Trump rally finger pointing.

At the same time, Greene has attributed the finger-salute to Christians pointing to God.

Friday, as if to prove the point, Fuentes posted on Telegram a photograph of Greene standing next to Trump with a Cheshire cat grin on her face. “As one” indeed. 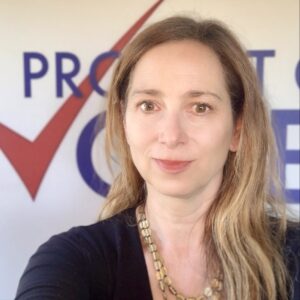 Jennifer Cohn is an attorney, election integrity advocate, and political writer whose articles have appeared in the New York Review of Books, Who What Why, The Independent, TYT Investigates, The Brad Blog, and Salon. You can follow her on Twitter at @jennycohn1.
PrevBook Bans and a New Era of American Totalitarianism
White nationalism is a political ideology that mainstreams racist conspiracy theoriesNext