My Experience Working for Ashley Ehasz as a Young Field Organizer

The greatest lesson I have learned in campaigns is that every story has the power to make a difference. I am determined to win this November through the power of sharing our stories.

When I first met Ashley Ehasz at a Doylestown rally for gun safety in mid-May, I was itching to jump back into the campaign world and work for a candidate that I believed in. Having grown up in Bucks County where Ashley is running to be the next congresswoman, I was passionate about electing someone new into office who was devoted to their constituents, who was willing to listen to a diverse range of perspectives, and who was actually committed to putting their words into action.

I was politically engaged throughout high school as a community activist, focusing on bringing more diversity and equity to Central Bucks through protests, press conferences, and speeches. But as I grew older I began to recognize that activism requires advocates in public office who were dedicated to making sure policies were passed that made a genuine impact on people’s lives. As I saw Ashley speak so strongly about legislative change that needed to happen in order to protect families and communities in Bucks County, I realized that she was genuinely committed to bettering our lives in this district – something that we desperately need.

Many know Pennsylvania’s First Congressional District (PA-01), or Bucks County and a slice of Montgomery County, for being a crucial swing region in a purple state. PA-01 is a Biden +5 district, meaning that we voted for Biden with a 5 percent margin over Trump in 2020, yet every Democratic challenger that had faced Republican incumbent Rep. Brian Fitzpatrick and his millions of largely outside money in the past few years had been unsuccessful. When I was first brought onto the campaign, I knew that challenging Fitzpatrick would undoubtedly be an uphill battle. Not only did he have a massive financial advantage, but in terms of name recognition, he was widely known across the district while Ashley was a first-time candidate. Additionally, Fitzpatrick held an image of being a moderate Republican, meaning even Democrats were drawn to him to represent PA-01. Amidst other factors, it seemed doubtful that we could gain an edge over Fitzpatrick.

However, everything changed after the overturn of Roe v. Wade through the Dobbs decision. As the outrage over SCOTUS’s decision in late June grew, along with polling numbers after the Dobbs decision, it became clear that the community in our district was deeply affected. People have started to come together from across party lines to protect the right to choose, and they are looking at their current representative differently.

Fitzpatrick voted twice against codifying Roe and the Women’s Health Protection Act; he’s on the record vowing to defund Planned Parenthood; he supports the Republican agenda to ban abortion even in some cases of rape or incest, or even with threats to the mother’s health. And the outrage is not just in our district. Polls show the majority of Americans support abortion access at some level and as the election season continues, voters are showing us this matters to them – a win for Democrats in NY-19’s special election, Kansas’s constitutional amendment on abortion turned down despite it being a deep-red state, Mary Peltola’s win in Alaska as the first Democrat senator to hold the seat in over 50 years. And now in PA-01, Ashley, a veteran who fought to protect the rights of Americans overseas, is a pro-choice candidate, running against Fitzpatrick.

As the organizer on the campaign responsible for direct contact between the campaign and our 750,000 constituents in order to mobilize people to vote, I have heard over and over again that abortion is the number one issue that voters in the district are concerned about. My goal while working for Ashley was not only to build a comprehensive program that reached out to infrequent voters across the district but also to engage young people in the political sphere. More young people are undoubtedly needed in politics – studies show that our generation is the worst off in terms of finding affordable housing, facing the climate crisis, and undergoing other financial and economic hardships via student loans and inflation – and having our voices heard through campaigns is essential to making sure we are represented in office. With full campaign support, I focused on building an internship program that engaged youth and students up and down the East Coast – drawing people from Florida up to Massachusetts – as a crucial component of our field work. Now, with almost 50 interns on the team, we’ve been able to make thousands of calls to voters and create social media content reaching hundreds of people online. Our campaign understands how necessary Gen Z is to this election, and by engaging dozens of students we’re capable of expanding our reach across PA-01.

The young people on our team are not only determined to make an impact on this election that is crucial for our futures, but we have all grown up in an environment shaped heavily by policies and legislation that affects us deeply. Therefore, it comes as no surprise that we’ve all been drawn to this campaign in different ways and are passionate about creating change through Ashley’s race. When we make phone calls to voters, I urge every intern and volunteer to share why we’re involved with this race. For some, they grew up in the district and believe Fitzpatrick doesn’t represent their views. For others who live farther away, Ashley’s platform aligns with them more and they quote specific policies they believe in. Many tell voters about how the overturning of Roe negatively impacted them, or those around them that they loved.

The greatest lesson I have learned in campaigns is that every story has the power to make a difference. Our passion for this work comes because the system, and certain politicians, have failed us in a way that we have the capacity to change when we become involved. Working for Ashley has not only exposed me to more of the world of politics, but I am endlessly grateful to have the support of a team that believes in the power of youth mobilization and Gen Z in this election. Our team is united by our desire to create change, but more importantly, to create community. Ashley and I both understand the impact one story can have on one voter. And I am determined to win this November through the power of sharing our stories. 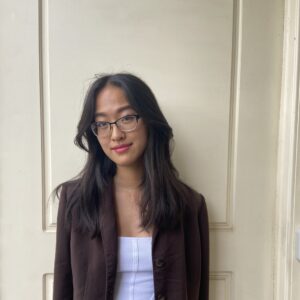 Sarah Zhang (she/they) is a 2021 CB East graduate and rising sophomore at UNC-Chapel Hill studying computer science, political science, and data science. She is currently the field organizer for Ashley Ehasz for Congress in PA-01, and is passionate about youth activism and intersectional social justice.
PrevMelissa Cerrato Will Not Be Bullied Into Silence by State Rep. Todd Stephens
Corporate Media Has Failed to Report Accurately on the Threats to Women’s Reproductive RightsNext