“The dark money infrastructure attacking public schools was built over decades,” the report argues, “before the current manufactured outrage was directed at centers of public learning.”

Right-wing, dark money groups have exploited “stress about the pandemic and its disruption of public education and people’s lives” to elect extremist Republicans in the midterm elections and redouble efforts to privatize public schools. That is how a new report from the progressive watchdog group, True North Research, sets the table in its new report, “The Disinfo Playbook Targeting Our Public Schools and Elections” (the “Playbook” hereafter). The report serves as a guide to anti-public school front groups and “their dark money-funded efforts to censor books, disrupt equality, and impede fact-based learning by kids.”

Over the past few years Bucks County and other Pennsylvania school districts have been flooded with a dizzying and unceasing barrage of controversies from resisting common-sense masking policies during the pandemic; battling over curricula and “critical race theory”; challenging supportive school environments for LGBTQ students; and, the return of that oldie-but-goodie, banning books from school libraries. The pattern is a familiar one: “concerned parents” show up to school board meetings outraged and aggrieved, demanding that parents – not teachers, medical professionals, child psychologists, librarians, or educational experts – should dictate schooling in our communities.

What’s not clear to most members of the community, however, is that the call for “parental rights” is part of a well-oiled and well-funded machine designed to incite culture wars and rile up the base of an increasingly extremist Republican party. True North Research’s report exposes the gears of this machine by following the money behind the outrage. The report documents the deep-pockets and seasoned political organizations funding and strategizing for “concerned parents” groups such as Moms for Liberty, Parents Defending Education, the Independent Women’s Forum, and Fight for Schools.

“The dark money infrastructure attacking public schools was built over decades,” the report argues, “before the current manufactured outrage was directed at centers of public learning.” While cloaking itself in grassroots garb, this infrastructure is built and maintained by the same billionaires who have helped remake the Republican party in the image of right-wing extremism.

“Billionaires like Charles Koch, Richard Uihlein, Besty DeVos, and the Waltons have used millions from their vast fortunes to undermine public schools,” the report adds. “They use their family foundations to underwrite tax-exempt 501(c) non-profit groups to advance their efforts to weaken support for universal public education and push alternatives that redirect public tax dollars into private hands.”

As Alyssa Bowen, one of the co-authors of the report, explained to me on Raging Chicken’s Out d’Coup podcast, “some of these groups are long-standing anti-public school/anti-public education groups that have existed for decades but others are new,” Bowen said. True North Research’s report is “an effort to get our knowledge out there and organize it and make it useful for the broader public, especially for local activists and allied organizations.”

Bowen said these groups are trying to influence the outcome of the upcoming midterm elections and so “we’re trying to help give people some context about what’s happening nationwide so they can take it, use it, and help them make sense of what’s happening at the local level as well.”

Let’s take one example of an organization that has injected some of the worst vitriol into school board meetings in Bucks, Lehigh, and Montgomery counties: the Florida-based Moms for Liberty. On their “About Us” page, Moms for Liberty frames the organization as “Moms, Dads, Grands, Aunts, Uncles, Friends.” Members of the group’s Executive Board are described along the same lines. Co-founder Tiffany Justice is a “wife and mom of four school-aged children” and a former school board member. Tina Descovich, the other co-founder, is touted as another former school board member who has developed “a long record of fighting for students and parental rights in Florida and at the national level.” They also want you to know that “she and her husband Derek have five children” and that she’s “passionate about America.” According to Media Matters for America, a third co-founder, Bridget Ziegler, is not on Moms for Liberty’s webpage, but is on the original incorporation document as a co-director (her name was later removed). Ziegler’s husband, Christian Ziegler, is the vice chair of the Florida Republican Party. Bridget Ziegler is now a Sarasota County School Board member.

When asked about Moms for Liberty’s funding, Tina Descovich told The Washington Post that its largest funding source comes from t-shirt sales and small donors. However, True North Research shows that Moms for Liberty has funding linked to the Heritage Foundation and their 2022 Summit held this past summer – featuring high-profile speakers like Florida Governor Ron Desantis, former Trump Secretary of Education Betsy DeVos, former Trump Secretary of Housing and Urban Development Ben Carson, Senator Rick Scott, as well as a parade of Florida state legislators – was sponsored by groups including Heritage, the Leadership Institute, and Turning Point USA which have received significant funding from  the billionaire Charles Koch’s fortune.

Moms for Liberty also has deep connections to the Republican party power structure, according to True North Research’s report. For example, Florida state Senator Debbie Mayfield and Florida House Representatives Randy Fine and Tyler Sirois are donors to the organization. Moms for Liberty’s Treasurer, Marie Rogerson, “also has ties to the Florida Republican Party.” Moms for Liberty’s public relations “is being handled by Calvary Strategies whose CEO is a former campaign manager for Senator Rick Scott.” And, Florida Governor Ron DeSantis appointed Ester Byrd, “a Moms for Liberty member who has made statements supportive of January 6 insurrectionists,” to the Florida Board of Education.

The “Playbook” tracks the funding and political connections of several of the other major players putting schools in the crosshairs of right-wing culture warriors. For example, the Independent Women’s Forum has long ties to deep-pocketed school privatization advocates like the Center for Education Reform, Besty DeVos’s American Federation for Children, and the Koch-Funded American Legislative Exchange Council.

The relatively new “Fight for Schools” that was instrumental in helping elect Virginia’s Republican Governor Glenn Youngkin by stoking “critical race theory” fires, is run by Ian Prior “who worked in the Department of Justice in the Trump administration” and was also “the top communications official for the National Republican Congressional Committee during the 2016 election cycle.” In other words, the major players in the “grassroots” groups of “concerned parents” are in bed with the most powerful players in right-wing Republican politics.

Parents and community members have reason enough to be concerned about the extremism being injected into our schools by these organizations. It is even more concerning, as the “Playbook” lays out, that “attacks on public school teaching curricula can serve many purposes, including activating right-wing voters, undermining teachers, softening the ground for school privatization, and dog whistling to Trump’s base.” And as the 2022 midterms loom, it is clear that these dark-money organizations are willing to lay waste to our schools and communities to expand the right-wing’s hold on our state and national politics.

According to the “Playbook,” it certainly looks like Moms for Liberty has its eyes on Pennsylvania. “Based on Moms for Liberty’s claims on its website and 2021 IRS filings, the group may have active chapters in as many as 23 out of Pennsylvania’s 67 counties,” the report states. Last year, Lois Kaneshiki, who directs Moms for Liberty’s state chapters, also founded the “Take Back Our Schools” PAC, the report shows. Kaneshiki’s PAC is recruiting school board candidates to run in all of Cumberland County’s nine school districts next year “who will fight CRT/SEL [Social-Emotional Learning] in our schools.” It seems likely that we will see more of the same in counties across Pennsylvania once the 2022 IRS filings are made public.

Bowen pointed out that there are also emerging connections with Christian Nationalist and anti-abortion groups that were not a main focus of the “Playbook,” but are a growing cause for concern. “The Christian Nationalist dark money is also really interested in this. Some of them seemingly have a financial interest in attacking public schools because, like Betsy DeVos, they want public money to go to private Christian schools,” which lines up precisely with reporting on the education agenda of Pennsylvania Republican gubernatorial candidate and Christian Nationalist, Doug Mastriano.

In many ways right-wing Christian organizations have never stopped their attacks on public education. According to Bowen, “the Family Research Council and the Alliance Defending Freedom – two major anti-abortion, fringe Right groups – are running trainings for school board candidates and/or doing ‘parental rights’ trainings and initiatives.” In some ways the Christian Nationalist organizations are already one step ahead in that they are also “pushing cases to the Supreme Court saying that if they [private, Christian or religious schools] get public funding, they can still discriminate against LGBTQ students or teachers. There’s a whole infrastructure designed to not only get public funding diverted to these schools, but make it so that the public has no real say in how the funds are used.” [see, for example, the July 2022 Supreme Court ruling in Carson v. Makin].

If all of this sounds depressing or overwhelming, it is. The “Playbook” is not the kind of report that is designed to inject a sense of false hope into our political context. It is, however, an important resource in our toolbox for fighting back. It’s helpful to be able to name the strategies the right-wing is using. It’s important to pull the shroud of disinformation from the “grassroots” public image of local “parental rights” groups. It’s clarifying to know that we are in a serious fight – and that our local fights in our school boards are part of the fight to defend what vestiges of democratic culture and governance we have left.

The “Playbook” does not conclude on a note of despair. It closes out with additional strategies, tactics, and resources for taking action. For example, there are links to a messaging guide and digital tool kit from We Make the Future who works to support fully and equitably funded public schools; resources and trainings from H.E.A.L. Together (Honest Education Action & Leadership); and, Red, Wine, & Blue’s “Parent’s Playbook” on countering right-wing extremism in our schools.

At the most basic level, the “Playbook” can help us press pause on the gaslighting. No, these right-wing activist groups attacking public schools are not simply “concerned parents.” When those same “concerned parents” start reading their scripts at school board meetings, we can be assured that some of them are reading professionally crafted propaganda with lots of money behind it. And when local journalists report on school board meetings, we can point them in the direction of the “Playbook” and demand they do their due diligence and report on the dark money fueling the attacks on our public schools. 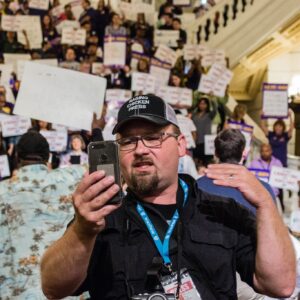 Kevin Mahoney is a professor at Kutztown University. He is also founder and editor of Bucks County’s progressive Raging Chicken Media podcast.
PrevPennsylvania Had Third Most Book Bans in the Nation Last School Year
Teachers, Students and the Central York Community Defeated a Racist Book Ban in Their School DistrictNext