Money spent on stock buybacks is money that otherwise could have been used to invest in the companies’ workers by increasing wages, providing better benefits, and improving work conditions.

Remember at the beginning of the COVID-19 pandemic when the airline industry was begging for a bailout and received billions from the federal government? The same airline industry that spent over 95 percent of its free cash flow on stock buybacks in the last decade; Airline executives as well as the C-suite in many publicly traded corporations have decided to spend billions of dollars on buying back their own stocks every single year. Why would they do that?

The answer is quite simple – to arbitrarily inflate the stock price.

Before 1982 (and after the Depression), stock buybacks were illegal and were considered a form of stock manipulation. During the Reagan Administration this rule was changed, and the flood gates were opened.

Once the restriction was lifted, executives could make some easy decisions that would put more money in their pockets instead of investing in their workers. Here is how it works. If a company has 100 shares outstanding of their own stock and buys 25 back and retires them, there will still be 75 shares outstanding. By reducing the supply, the price will go up per share even though the inherent value of the company does not change at all.

The way the executives make money from this is extremely blatant once we understand how this process works. The top marginal tax rate is 37 percent on income compared to only 20 percent for the top capital gains tax rate. Executives are usually given a base salary, but also have bonuses built into their contracts typically triggered when the stock price hits a certain benchmark. These bonuses come in the form of stock options and since the sale of stocks for a gain are considered capital gains instead of wage income, they can be sold at a tax-savings of at least 17 percent.

What sparked my outrage was that back in March of 2020 during a press conference, President Trump claimed that nobody could have guessed that executives would have spent their tax cut money (from the Tax Cuts and Jobs Act of 2017) on stock buybacks rather than spend it on raising wages or increasing benefits for their workers. This is a brazen lie.

I remember sitting in my corporate tax class at Penn State while the tax reform bill was passed and thinking how much money these executives were going to make while the middle class and working class were given crumbs. Crumbs won’t cut it anymore. Working class Americans deserve their slice of the loaf.

The key reason I am drawing this connection is that the money spent on stock buybacks is money that otherwise could have been used to invest in the workers of the companies by increasing wages, providing better benefits, and improving work conditions – all things that also lower a company’s tax liability. So, stock buybacks aren’t even necessarily more profitable for the company as a whole, but they certainly put more money in the pockets of a few executives. Greed is what drives the choice, and we should take that option off the table.

Our elected officials in Congress must ban stock buybacks. We cannot rely on the goodwill of businesses to provide for workers. Corporations are designed to make as much money as they possibly can, and executives reap the rewards while workers are left to fend for themselves. Unless we limit the levers of power they control, these large corporations will run rampant on our economy until someday they come hat in hand to the taxpayers when they are on the verge of collapse, much like the airline industry did in 2020.

It is fiscally irresponsible and morally objectionable to continue to allow stock buybacks. In lieu of enabling executives to inflate their stock prices, we should demand that workers are given the wages and benefits they deserve. Lawmakers must prioritize incentivizing investment in the people of America rather than continuing to allow the boardrooms of mega-corporations to decide what is best for us all. 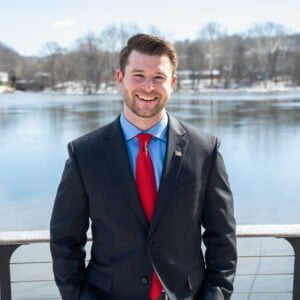 Connor OHanlon, CPA, is host of the Greater Society Podcast, Chair of the Doylestown Democrats, Director of Candidate Development for the Bucks County Democratic Committee, and EMPA Program Representative for the LPS Government at UPenn.
PrevBucks County Must Prioritize Open Space, Environmental Protection in Planning Process
Veterans, Scams, and Higher Education in PennsylvaniaNext