Photojournalist Zach Roberts provides a first-hand account of the Penn State community standing up to the ‘Stand Back and Stand By’ Tour's hate on campus.

This shouldn’t have shocked anyone. As the Philadelphia Inquirer’s Will Bunch pointed out a few weeks ago, the “Proud Boys’ only ‘idea’ is violence.” And ultimately it was violence by a right-wing provocateur that led Penn State University to cancel a scheduled talk featuring Gavin McInnes, founder of the hate gang The Proud Boys and right-wing troll Alex Stein Monday. The two were invited on campus by Uncensored America, who the Southern Poverty Law Center describes as a far-right student organization.

Students organized in the weeks before to push the university to cancel the event on their campus, demanding the administration fight in court if it had to.  The administration persisted citing free speech values (or absolutism), saying in a statement, “The best response to hateful speech is inclusive speech and the creation of spaces devoted to reflection, healing, and the celebration of those qualities we value.”

In response, students planned non-violent actions to stop or disrupt the event. Around 100 students and locals rallied in front of the Thomas Building on Main Campus holding signs, some with very direct statements to McInnes, who founded what even the FBI has labeled an “extremist group.” One speaker, wearing a mask and Penn State hoodie, said that the campus administration was trying to show that it was “tolerant of white supremacy” and also cited the Proud Boys’ deep involvement in the attempted insurrection on January 6th.

As if to prove a point a professional troll Alex Stein walked into the assembled activists trying his hardest to bait them. One protester spit on him, which he seemed to have enjoyed a great deal.

Gathering the video/social media content, after provoking the crowd, which he needed to justify his appearance in Pennsylvania he eventually went back inside behind the safety of the police guarding the Thomas Building. Stein had a small entourage of people that watched his antics carefully, one of them wearing a hat with the letters RWDS on it. RWDS is a pretty standard extremist abbreviation for Right Wing Death Squad.

As the time grew closer to 7 p.m., the originally scheduled start time, Proud Boys began to appear, looking for a way to gain entry to the building.

Police initially wouldn’t allow this Proud Boy entry into the Thomas building until he created a scuffle with protesters, very outnumbered, they let the member of a gang into the building.

In response to the scuffle, which the law enforcement did absolutely nothing to prevent, they brought in riot police on horseback. No warning was given to the students as the horses charged in, many coming close to trampling protesters. In fact, the police response, or lack thereof, has led to an uproar of criticism on campus and in the community.

Soon after the police blocked off the entrance with horses, they detained a protester. It was the only arrest this reporter witnessed throughout the evening.

Police again, standing by, stood back and watched. After about a minute of being bumped around and refusing to leave the area, one of the men released a stream of bear mace hitting multiple people around him. This included myself, another video journalist Ford Fischer and several student protesters.

The group ran past the still complacent police, one stopped for a moment as if to check in on them. No arrests were made, or attempted.

The bear macing seemed to have been what finally caused the administration to cancel the event. However, Penn State’s administration issued a statement blaming the cancellation on protesters: “We have encouraged peaceful protest, and, while protest is an acceptable means of expression, it becomes unacceptable when it obstructs the basic exchange of ideas. Such obstruction is a form of censorship, no matter who initiates it or for what reasons.”

Celebrating the cancellation of the hate speech event, Penn State students and allies took to the streets of the university, marching towards a space where they could organize a safe exit back to their homes.

Back at the Thomas Building a small number of protesters still congregated, waiting for the exit of Gavin McInnes, Alex Stein and their friends. Even though all of the exits of the building were blocked off and guarded, police declared a dispersal order that was backed up by nearly a dozen State Troopers on horseback, several more dozen members of law enforcement in riot gear and at least two officers in SWAT kit.

Chased off the grounds surrounding the building by the horses and police readied for violence, the few lingering protesters celebrated and posed for photos in front of the police.

It remains to be seen what, if any, lessons the university administration learned from this staggering lapse in judgment. 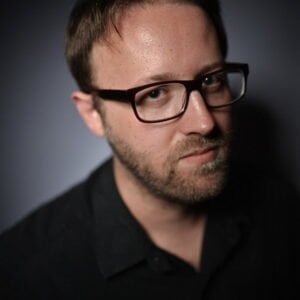 Zach D. Roberts is a freelance photojournalist who has covered protest and activism around the country. He covered the 2017 Unite the Right rally and is a Puffin Artist Grant Recipient. His film on voter suppression in Georgia, Vigilante: Vote Suppression Hitman will be released nationally on Nov. 2.
PrevRep. Brian Fitzpatrick’s Five Biggest Lies During His Debate with Democratic Challenger Ashley Ehasz
State Courts, Including in Pennsylvania, Are Fielding Sky-High Numbers of Election-Related Lawsuits Ahead of the MidtermsNext