The truth of our abortion stories need to be shared

These stories live in the shadows cloaked in unnecessary shame and our truth must shine to keep this right.

With the offensive and un-American draft opinion to overturn Roe v. Wade, it was really put in black and white. The Supreme Court is working to take away rights we’ve had for 50 years. Longer than I’ve been alive.  Rights that have directly benefited my life. Rights my daughters’ generation and future generations deserve to live under.

In speaking with friends, men are just as supportive of the right to an abortion as women are. And we need to hear their voices and support as well. The time is now to speak about how this impacts and has impacted your life.

The truth of our stories need to be shared.

For decades, I’ve only recounted my abortion story to my most intimate of friends. And almost every time, I’d find the person I shared with had a similar story. Or of the abortion they had after suffering an unreported sexual assault. Or of their own struggle with infertility. Or when they were pregnant when they so desperately wanted to be, but the pregnancy was not viable and their life was at risk. These stories live in the shadows cloaked in unnecessary shame and our truth must shine to keep this right.

The truth is my abortion story is common and normal.

When I was 19 years old, I had just started my college career. I was in love and I was pregnant. My mother and I did not have the relationship where I felt I could ask to go on birth control. However, when I found I was pregnant, I was lucky to have a supportive partner, who stood by me and agreed with my choice to have an abortion.

I had the right to a choice between carrying a pregnancy to term and an abortion. I knew that my life path would be impacted based on my decisions in this circumstance.

While I did not feel responsible, capable, or mature enough to raise a child with another teenager, we had the freedom to make that choice. And we need to preserve that choice and those freedoms for all Americans.

In the 1990s when I was a teenager, the narrative that was pushed about having an abortion was you would have an immense amount of regret, shame, and longing for the child that could have been. This concern ate at me while I decided what to do. I knew I wanted children one day, but I was concerned the timing would destroy the trajectory I wanted for myself. I was also concerned that the procedure would somehow leave me infertile.

While pregnant, I became withdrawn, depressed, and could barely handle concentrating on my assignments. Later, my classmates took note of the difference of the person I was as an upperclassman after their initial impression of me was someone who did not care about her studies.

What I was not prepared for when I had my abortion was the feeling I did have afterwards. It was relief, gratitude, and freedom.

I had the freedom to complete my degree unencumbered.

I had the freedom to move across the country after graduation.

I had the freedom to cut ties from my former love when our relationship had run its course.

I had the freedom to travel extensively.

I had the freedom to pour long hours of work into a firm that would benefit my career.

Now that I am a parent, I feel even stronger in my resolve that it was the best decision for me and my future family at the time. The life experiences that I had in my 20s have enabled me to provide an amazing life for my daughters.

These are the reasons I believe in the freedom of choice.

I’ve lived a happy adult life as a result of the freedom I’ve experienced and I don’t think any woman deserves to have her freedom taken away.

When I read these words from Ruth Bader Ginsburg, I saw my own experience within them:

“The decision whether or not to bear a child is central to a woman’s life, to her well-being and dignity. When government controls that decision for her, she is being treated as less than a fully adult human responsible for her own choices.” 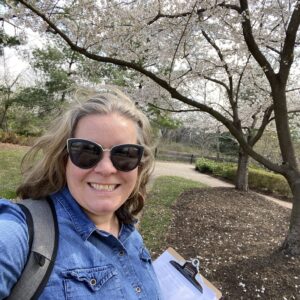 Kelly DeJong was born and raised in central Bucks County PA. She is a graduate from Carnegie Mellon University. Today, she is raising her daughters and beloved pets with her husband on a farm in the CB community.
PrevState Sen. Steve Santarsiero wants to head Bucks County Democratic Party
Eligible PA families to see relief after COVID-19 disrupted school meal programsNext