“Brian Fitzpatrick is the foremost anti-choice lawmaker in Bucks County” and was the target of local voters’ outrage.

As the reality of Friday’s Supreme Court decision begins to sink in, close to 300 Bucks County residents gathered at the Newtown district office of Republican Congressman Brian Fitzpatrick to express outrage at the Court’s ruling to overturn Roe v Wade.

Until today, no one born in the United States after 1972 has ever known a time when women didn’t have complete control over their reproductive health care.

“I flew Apaches over Baghdad, ready to die for our country. In the wake of the SCOTUS decision to overturn Roe v. Wade, I will not stand by while Americans’ right to have an abortion is ripped away,” remarked Ehasz earlier in the day on Twitter.

Fitzpatrick is anti-choice, voted to defund Planned Parenthood, and also voted against the Woman’s Health Protection Act. Despite these positions and votes, the Congressman issued a press release responding to the overturning of Roe v. Wade where he demonstrated his innate ability to talk out of both sides of his mouth in an attempt to maintain his manufactured “bipartisan” brand.

“Brian Fitzpatrick is the foremost anti-choice lawmaker in Bucks County, thus it is natural to bring this issue to his doorstep. There is no grievance more heinous than losing one’s right to bodily autonomy, and that is what we are facing in America today,” said Zolfo.

“Young and old showed up at today’s abortion rights rally and it was great to see the amount of young women in attendance. To save abortion rights in Pennsylvania they’re planning to vote for Josh Shapiro for governor in November,” said Snyder.

Abortion remains legal in Pennsylvania, but only as long as a Democrat holds the governorship. But even then, it is not guaranteed because the Republican majority in the gerrymandered legislature wants to use constitutional amendments to do an end-around the governor’s veto pen.

Republican gubernatorial candidate Doug Mastriano has, without hesitation, vowed that if elected abortion in Pennsylvania will be illegal and without exceptions for rape, incest, or medical situations where a pregnant woman’s life is at risk.

In his concurring opinion, Supreme Court Justice Clarence Thomas indicated that the Court may reconsider other precedent setting cases including gay rights and the ability to access contraception.

Today’s Supreme Court decision, and possibly future decisions, place into jeopardy civil liberties that most Americans have never perceived to be temporary or in peril. The only way to counter future punishing rulings is to elect Democrats and to vote in every election.

Pennsylvania’s upcoming general election will be held on Tuesday, November 8. Are you registered to vote? Click here to check your registration or to register to vote.

Jenny Stephens is a freelance journalist who has written for a variety of publications, including The Reporter. An avid collector of all things vintage, she resides in Lansdale, PA.
PrevCelebrate the Rainbow: Perkasie’s Family Pride Festival Embraces the LGBTQ Community
Online data could be used against people seeking abortions now that Roe v. Wade has been overturnedNext 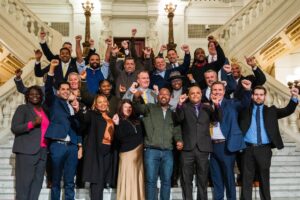