This November, Pennsylvanians need to come together in defense of our democracy and our courts.

With elections in Pennsylvania fast approaching, it’s important to remember just how crucial trust is to maintaining our democracy. Trust is to elections what a lock is to a key – one can’t work without the other. This year, like every year, our poll workers, election officials, and judges will work tirelessly to make sure that every vote is counted and that our elections go off without a hitch. However, that mission becomes difficult, if not impossible, when public officials work to undermine trust in the electoral process.

Imagine it’s the bottom of the ninth inning and the Philadelphia Phillies are on the brink of winning a game seven to go to the World Series, when all of a sudden, the opposing team’s batters refuse to accept the umpire’s decisions on what’s a ball and what’s a strike and start throwing temper tantrums at home plate. Players stop playing, dugouts get emptied, and what was supposed to be a fair contest devolves into chaos. Fans in the stadium would rightfully be upset. They’d trusted both teams to play by the same rules and accept the result of the game, win or lose.

As ludicrous as that scenario sounds, something similar but far more concerning has been happening here in Pennsylvania. For years now, extremist public officials across the state have bought into a dangerous trend of ignoring court orders they don’t like. Their actions are a shot at the heart of our state democracy, undermining checks and balances and causing chaos for regular Pennsylvanians.

Take, for example, the case of top Senate Republicans refusing to hand over congressional district data to our state Supreme Court in 2018. GOP politicians fought back against the court, arguing falsely that they had more than the power court. And while they did eventually comply with the court order, their attitude of open animosity toward our state judges would only worsen with time. The years since have seen several attempts by state Republicans to oust or replace judges for issuing rulings they didn’t approve of.

And this isn’t just happening at the very top levels of our state government. In August, election officials in three Pennsylvania counties – Berks, Fayette and Lancaster – refused for 11 weeks to certify election results in our primary elections because they believed that undated mail-in ballots, which were received on time, should not have been counted. Their obstruction continued despite orders from a federal circuit court and a state appellate court. It wasn’t until the Pennsylvania Department of State sued the three county boards of elections over their obstruction that they finally certified their results.

It’s hard to overstate how dangerous this kind of behavior really is. If public officials are allowed to cherry pick which court rulings to follow and which to ignore, they’ll effectively be above the law. It’s no different than baseball players picking and choosing which calls from an umpire they want to accept.

Thankfully, the overwhelming majority of Pennsylvanians support their state Constitution and won’t stand for this kind of behavior. The drafters of our state Constitution realized the importance of checks and balances in regulating extremist politicians and went above and beyond to enshrine those safeguards into our foundational laws. At this point, checks and balances are about as Pennsylvanian as Hershey chocolate, soft pretzels, and fries on salads. So when a small number of extremists attempt to tarnish that state tradition, it’s important that we push back.

We know now that courts and elections both depend on trust if they’re going to work as intended. Lose that trust, and our democracy falls apart. It’s essential that every Pennsylvanian feel confident that our elections will be handled correctly, and in the case of any discrepancies, that our courts will settle things fairly.

Put plainly, ignoring court orders is a direct attack on our state Constitution and the system of checks and balances that it establishes. This November, Pennsylvanians need to come together in defense of our democracy and our courts. It’s the only way to ensure a better, fairer future for every person who calls our Commonwealth home. Our votes matter, and our kids are watching – VOTE. 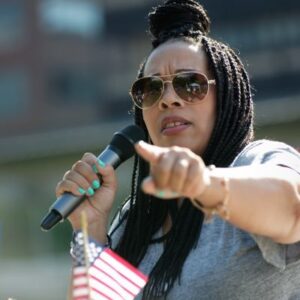 Kadida Kenner is the CEO of the New Pennsylvania Project, a statewide voting rights organization with a primary focus on voter registration, civic engagement and mobilization, and co-chair of Why Courts Matter — Pennsylvania, a campaign educating Pennsylvanians about the importance of the independence of both the federal and state courts. She writes from Chester County.
PrevThank you to the Phillies
Bucks County Doubles Down on LGBTQ+ Youth Support with Announcement of Second Rainbow RoomNext