The Republican congressman’s relationship with the truth is a tenuous one.

The recollection of an episode of Meet the Press recently came to mind. Specifically, it was the show that aired on January 22, 2017, when Kellyanne Conway uttered the phrase “alternative facts.”

Conway’s remark was stunning. Who could possibly have predicted that, in short order, the entire Republican Party would adopt and run with this outlandish theory whenever they disagreed with the truth? Yet, they have, and Congressman Brian Fitzpatrick of Pennsylvania’s First District is no exception. A glance in the rearview mirror of Pennsylvania’s recent primary election provides an assortment of examples ripe for the picking.

Without a doubt, Republican candidates running in PA01 – and their staffers – were plagued with gaffes who then pointed to “alternative facts” for a quick exit.

As first reported by this publication on April 2, 2022, “So Much For ‘Election Integrity’: Forged Petitions Mar Republican PA01 Congressional Candidate,” candidate Dasha Pruitt exited the Pennsylvania primary race. The Pruitt campaign has denied any wrongdoing, as have the petition circulators, but someone is responsible for the forged signatures.

Subsequently, on May 5, Fitzpatrick issued the following tweet referring to a Washington Times article that seemingly alludes to foul play when yet another Republican candidate, Caroline Avery, dropped from the race due to questionable primary petitions. Reality was seemingly lost on both the article’s author and Fitzpatrick as they tried to blame Democrats for Avery’s withdrawal from the contest. 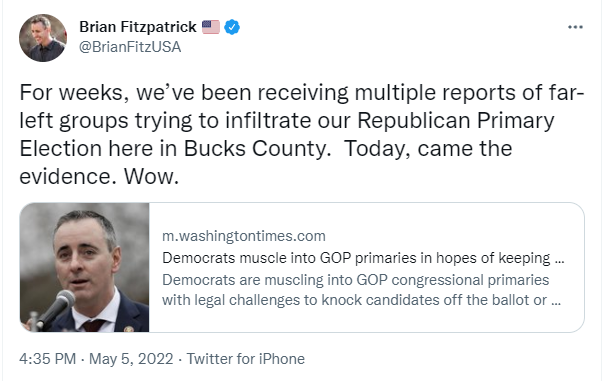 Caroline Avery’s withdrawal from the race.

Then, just days later, Levittown Now and the Philadelphia Inquirer reported on an alleged ballot harvesting scheme by then GOP candidate Billy Lanzilotti, who, just one month earlier, had worked for the Fitzpatrick campaign as evidenced by FEC financial reports. A representative from Fitzpatrick’s office quickly dismissed Lanzilotti’s association with Fitzpatrick as “a paid intern” no longer affiliated with the campaign.

Alternative facts are not exclusive to Fitzpatrick’s primary run and meld into his voting record as well as his campaign in November’s general election.

“FlipFlopFitz” is a nickname frequently utilized on Twitter to juxtapose Fitzpatarick’s legislative cosponsorship with his actual votes. Just days after 10 residents of Buffalo, New York lost their lives in yet another senseless mass shooting, Representative Fitzpatrick – who co-sponsored H.R. 350: the Domestic Terrorism Prevention Act – voted against it.

The actual – versus alternative – facts are that the GOP, including Brian Fitzpatrick, has next to nothing to offer its constituents but the obstruction of any Democratic attempt to provide support and relief to the American people. 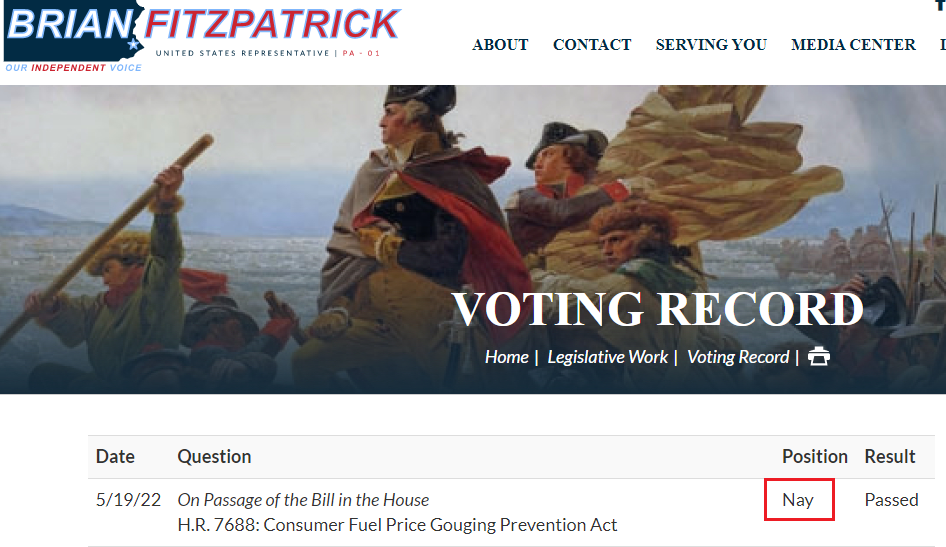 When a reporter recently asked Mitch McConnell what Republicans will do with their power should they win back the House in November McConnell replied: “I’ll let you know when we take it back.”

No one should be surprised by McConnell’s answer because there is no plan. Instead, Republicans are relying heavily on the promotion of the “Big Lie” – potentially the largest alternative fact there is – to do one thing: retain power at the expense of our democracy.

Fitzpatrick’s website provides ample evidence of this tall tale. Promoting his introduction of legislation to reign in supposed voting fraud, he refers to the very same process used not only in Pennsylvania’s recent primary – which he won – but also to the 2020 election … which he also won.

Is it possible that voter fraud only occurs when Republican candidates lose?

It’s time for Pennsylvania’s First District to elect representation based on integrity and, come November, voters are faced with a myriad of issues but none as serious as keeping our democracy. For those in PA01 the choice for representation in Congress is between Democratic challenger Ashley Ehasz or Fitzpatrick.

Make sure your vote is grounded in reality and truth for which there is no acceptable alternative. To check your registration or to register to vote visit VotePA.gov.

Jenny Stephens is a freelance journalist who has written for a variety of publications, including The Reporter. An avid collector of all things vintage, she resides in Lansdale, PA.
PrevAfter a White Supremacist Massacred 10 People in Buffalo, Rep. Brian Fitzpatrick Voted Against Protecting the Country from Racist Domestic Terrorists
Vote Counts in PA Senate Race Come to a Screeching HaltNext