Restoring Democracy, One Vote At A Time

Practicing democracy can be as simple as having a civil and informed conversation with someone, which can actually lead to new political engagement.

I recently had a technician come to my house to fix a stairlift. I had bought it long ago when my aging mother-in-law had thoughts of moving in. Since that never happened before she died, the stairlift sat unused. Now, as time passed, both the stairlift and my wife’s knee no longer worked. An upcoming knee replacement surgery (thank goodness for Medicare) demanded the stairlift get fixed soon.

The young kid from Philadelphia knew exactly what was wrong and fixed it quickly. Outside, while settling the bill, he saw my political lawn signs so I asked him if he was going to vote. He said no, voting won’t affect his life. He said election results are all pre-determined anyway so his vote doesn’t matter. He clearly needed a lesson in civics.

I told him of course his vote matters. I told him about a recent election here where an Asian-American woman lost by 7 votes. He seemed to remember her lawn signs. I said yeah, some mean people here defaced her lawn signs so we Democrats had a rally, raised some money, and bought her bigger signs. And she came close to winning. He said we were good people for helping her. I said that we were just simple good Democrats who had basic compassion and empathy for others.

I then said the Republican Party these days had gone off the rails with some of their candidates saying awful things out loud about Jews and Blacks.

He said that was definitely wrong. I of course agreed. I told him that Democrats had instead compassionately fought for things for people in need. Democrats recently lowered the cost of prescription drugs for old and sick people. I told him that my wife needed surgery soon and Medicare would help so much with the medical bills, but Republicans are now thinking of ways to get rid of it. They are also thinking of getting rid of Social Security too which certainly won’t help old retired people get by. Democrats had passed a huge child care tax credit to help struggling families take care of their kids during the pandemic. Democrats want to do good things for workers and families like raise the minimum wage, support labor unions to make the lives of workers better, and provide free pre-kindergarten and community college schooling for students. I told him the Democratic candidate for senator, John Fetterman, was a champion for repealing the criminalization of marijuana which was often used as a pretext for locking up young Black kids. In fact Democratic President Joe Biden just offered pardons for all federal marijuana convictions. Democrats truly believe in democracy and voting as they always try to make it easier, not harder for everyone to vote.

Republicans tended to vote against all these things since they were generally focused on cutting taxes for the rich, letting corporations go unregulated simply to maximize their profits, and staying in power at any cost.

My new friend’s eyes suddenly opened. He saw that there was a reason to vote and that his vote could make a difference. He promised to vote this year and would tell his friends to vote as well.

Will you do the same?

Back inside I tested the stairlift. It moved me higher to where I wanted to go. I hope the voters in November will move America higher to the realization of its true ideals and values: a democracy in which all can easily participate and an economy in which all, not just the privileged few, can share in the wealth of our great country. 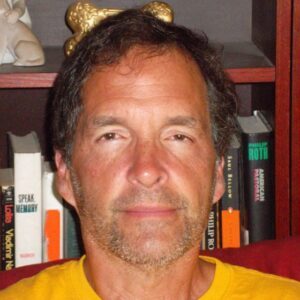 Steve studied philosophy at the University of Chicago where he developed critical inquiry and writing skills that enriched all his endeavors in life. He moved with his family to Bucks County in 1985 attracted by the excellence of its public schools for his children. He spent his life in public service in the Departments of Army, Navy, Labor and Treasury in the information technology field. During retirement, he became more active in local politics as an independent activist, a Democratic Committeeperson, and a Democratic candidate for State Senate in 2014. Although he enjoys walking his rescued pitbull Hazel in the beautiful parks of Bucks County, biking and trying to run in his advancing years, his new role as a grandfather fills him with exquisite joy.
PrevOpinion: Pennsylvania Must Vote Against Antisemitism in November
Rep. Brian Fitzpatrick’s Five Biggest Lies During His Debate with Democratic Challenger Ashley EhaszNext