Colorful flyers with a dark underlying message began showing up in Bucks County mailboxes immediately after the midterm election.

“Whose Children Are They?” asks the leaflet while extending an invitation to a Newtown eatery for drinks, dinner and the showing of a film –  claiming to be a documentary – that equates the U.S. public education system with Marxism and asks why educators are encouraging racism, sexual promiscuity, perversion and Communism in the classroom. It checks all the boxes of right-wing conspiracies or lies that if you follow Bucks County’s school board wars you hear religiously regurgitated at monthly meetings.

However, the Newtown community wasn’t having it.

“This morning my inbox was full of concerned Newtown residents’ horror over the upcoming showing of this hateful movie. Many of them were Council Rock teachers who took it personally,” Newtown Township Supervisor Elen Snyder said. “They were appalled that it would be shown in a popular Newtown business.” 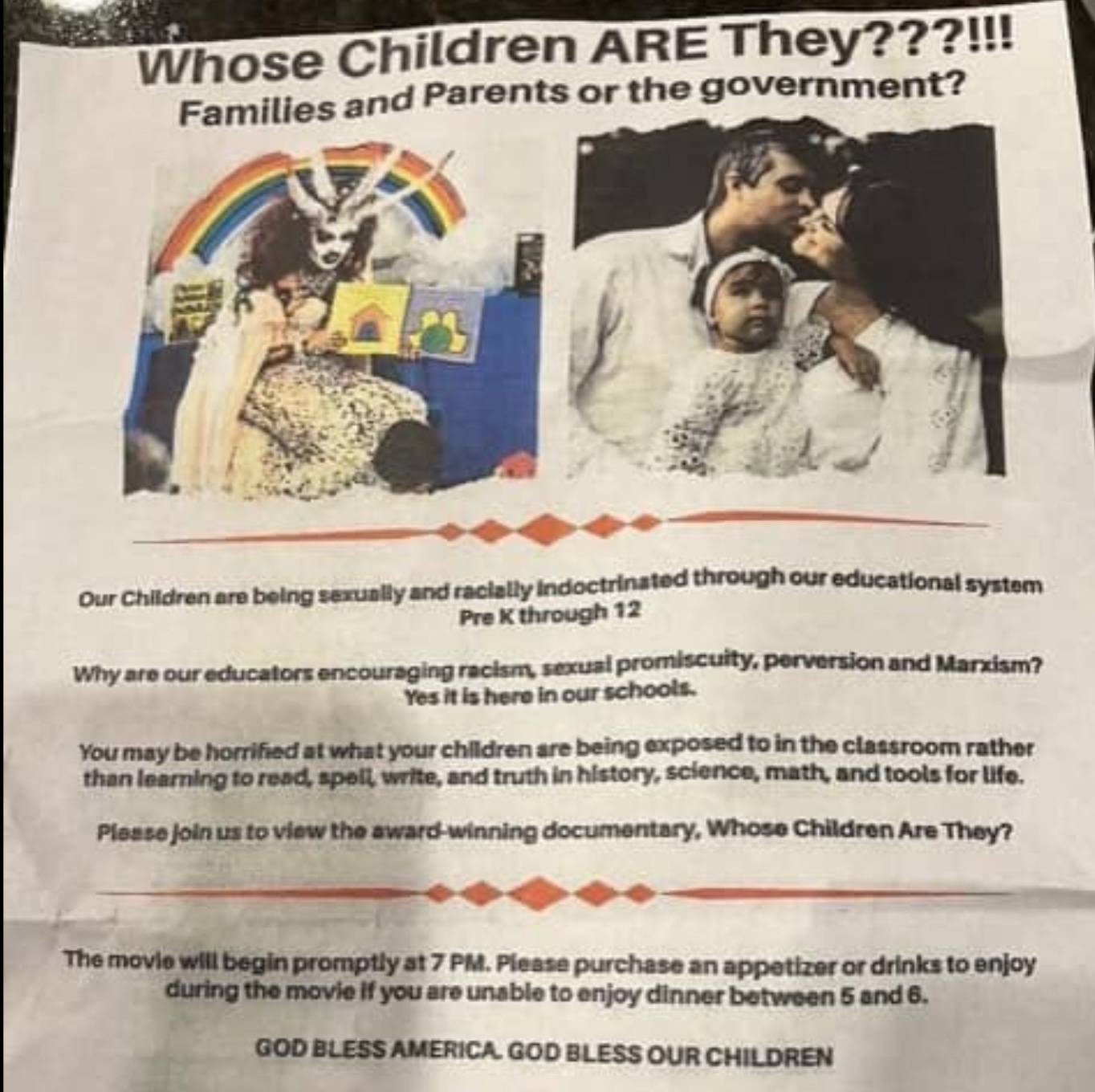 Snyder began to make inquiries on behalf of her constituents. “I had constant contact with the Peace Center representative Barbara Simmons and the Human Relations Commission representatives from the township and the borough,” she said

Ultimately, the owner of the restaurant canceled the event.

Since the cancellation, but believing that the film – or others like it – will eventually be shown in Bucks County, Simmons hopes to coordinate conversations with community and interfaith leaders. “Bringing together leaders is something I can do to see if we can get ideas from them. I can’t not do something,” she said.

There are very good reasons why residents of Bucks County were concerned about the showing of the film.

Filled with shocking and explosive – yet unsubstantiated – information aimed at public schools, “Whose Children Are They” features bigoted metaphors designed to marginalize specific student populations while demonize teachers and administrators.

The film is distributed, in part, by the Collide Media Group describing its mission as “Elevating media that inspires a deeper relationship with Christ.”

Regardless of the, at best, undiscerning review, the film is myopic and lacks credibility on a variety of issues.

Here are some highlights from the film (make sure your tin foil hat is firmly on):

– It portrays John Dewey as a Soviet villain, and claims “Communists through Dewey and the teachers’ unions intentionally undermined our educational system.”

– “At the end of the day they are creating an anti-American education system that teaches children to hate their country and to question everything they do based on this concept of systemic racism – which is critical race theory applied.”

– “I think that the overall goal is to desensitize children to all of these sexual ideas to all of this sexual content and give them the feeling that everything’s okay, everything goes and it’s been effective.”

– “This is about grooming our kids, not educating them on biology.”

– “We already have obscenity laws. What most people don’t realize is that schools are exempt.”

The “documentary” is a project of Jonathan & Deborah Flora, producers of the pro-life themed film, A Distant Thunder. Deborah Flora, featured prominently throughout the film and who ran a failed campaign to represent Colorado in the Senate on the 2022 GOP ticket, is the founder and president of Parents United America, a not-for-profit promoting the film’s ideology for the privatization of the public school system.

Laden with xenophobic conspiracy theories, the production is nothing short of extremist propaganda with an obvious agenda – the demonization of teachers’ unions, conflating public education with communism and sexual grooming centers, and creating mass hysteria in order to promote charter schools and make public ones obsolete.

Statistical data from Education Next, deemed a propaganda outlet for charter schools and school vouchers by Source Watch, is laced throughout the film to lend confusion by further blurring the lines between facts and falsehoods.

Hoping to incite unfounded anger, paranoia, and outrage at the public education system, “Whose Children Are They?” is an obvious attempt to sow seeds of discord throughout communities with the hope of eventually profiting from the destruction and subsequent privatization of public schools. Never mind that this potentially puts targets on local teachers’ backs.

If you see or hear of public screenings of this movie please send a message to The Bucks County Beacon here: https://buckscountybeacon.com/tip-line/.

Jenny Stephens is a freelance journalist who has written for a variety of publications, including The Reporter. An avid collector of all things vintage, she resides in Lansdale, PA.
PrevQ&A with Jennifer Cohn: A Christian Nationalism Post-Election Debriefing
A Bucks County Progressive Reflects on the 2022 Midterm ElectionsNext