How to Combat LGBTQ Book Bans in Schools

After the mass shooting at Club Q this weekend, it is all the more important that communities push back against anti-LGBTQ+ extremism targeting school boards.

I have spent the last year working with a group in New Jersey called the North Hunterdon-Voorhees Intellectual Freedom Fighters to fight against the attempted ban of five LGBTQ+ books that are in the high school libraries. Fortunately, the attempted ban failed, but some of the would-be book banners ran for Board of Education (BOE) positions, with one of them winning a seat.

While I am sure that progressive readers of this publication are already in favor of supporting LGBTQ+ students and fighting against censorship, it can be difficult to know how to respond when a loud group of book banners show up at the BOE and demand the removal of books. And given the rising tide of hatred against LGBTQ+ people, leading to horrifying violence such as what just happened at Club Q, it is crucial that we do respond.

So here are some of the lessons I’ve learned this year:

First, these book banners should be taken, in the words of John Oliver, “seriously but not sincerely.” Throughout last year, the book banners at the BOE meetings pushed for homophobic as well as racist policies, while insisting that they were neither homophobic nor racist. But of course it is homophobic to demand that five LGBTQ+ books be removed from the school library.

The book banners claimed that the books that were the most “inappropriate” just happened to be those with queer characters, and insisted that part of their motive was to protect LGBTQ+ students. Yet, the banners also referred to the books as “perversions” that described “heinous acts.” They called them “pedophilic” and even accused one our district’s librarians of disseminating child pornography.

The truth is that talking about sex is not the same as being pornographic. Even if the scenes that so bothered the banners actually involved pedophilia in some way (they don’t), it does not follow that the books would somehow be promoting it. But even to point that out is to take the book banners too sincerely. They are not really worried about pedophilia. If they were, they wouldn’t choose school library books as the starting place to fight it, because reading books doesn’t put people in danger of pedophiles.

Further, anyone who has even a passing knowledge of the history of homophobia in this country knows that the first thing people do to demonize the LGBTQ+ community is to link queerness to perversion. It is a dog whistle so loud that it can hardly be called a dog whistle, and nobody should ever take it sincerely.

And, while it was not the focus of their efforts in our district last year, the rhetoric of the would-be banners did include “CRT,” and their comments made it clear that they believe that teaching that racism is bad is “indoctrination.” This is no less harmful or insincere, and has been very successful in some districts and states.

The book banners are extremists. Their goal is not to protect children, but to further marginalize LGBTQ+ people and racial minorities. Removing The 1619 Project from school libraries will not protect people from racism any more than removing Gender Queer will protect people from pedophiles. What it will do, though, is tell already-marginalized kids that they don’t matter—worse, that they are “perverse” and their stories and histories are “inappropriate.”

So how to fight back? Perhaps the most impactful—and, fortunately, the easiest—is simply showing up at Board meetings and organizing others to do the same. In our district, we arrived with rainbow masks for anyone who wanted them. This was a cheap and easy way to provide a visual to show the BOE that the vast majority of attendees were there to support the librarians, the books, and the students. (In a post-mask world, big rainbow stickers would also work.)

Every public meeting has time for public comments, and it’s good to strategize a bit about how to use each person’s three minutes. First, prioritize students who want to speak. Then, try hard to limit each comment to less than the allotted time—in these situations, the best way to be powerful is to be concise. A simple “I support the librarians and the books” is plenty. With large meetings, there isn’t time for everyone to speak (and not everyone will want to), and that is another reason to have some visual cue to indicate support for the books.

Remember that anyone who lives in the community can be involved, whether they have children at the school or not. Alumni who don’t have kids in the school are an especially great resource because they are tied to the school but do not have to worry about how their participation might impact their kids. Retirees who once had kids in the district are great as well, so don’t discount your parents and their friends if they happen to be local.

Another strategy is to focus on your BOE’s policy for formal book challenges. The policy should require that people make their challenge official – it should not be enough for people to stand in a BOE meeting and read quotes from books they don’t like. Instead, there should be a form that they have to fill out, and ideally that form should require enough leg work that people cannot just troll the BOE with insincere challenges. Then, once an official challenge has been made, the Board should have a transparent policy for the next steps. These are some concrete things to ask the Board to do if and when (or even before!) banners descend on your BOE.

The book banners would have us believe that the argument to get rid of the books is equally legitimate as the argument to keep them, but this simply is not true. It is not oppressive to students or parents to include books that they do not like in a school library. It is oppressive to remove books based on the personal preferences of one group of people, particularly when such removal reduces the representation of already-underrepresented groups. It is important to take them seriously. As we saw just this weekend at Club Q, the danger their ideology poses is serious. But they do not deserve to be taken sincerely. 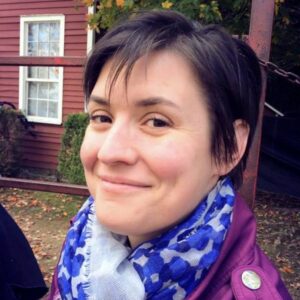 Alexa Offenhauer is an Assistant Professor of English at Raritan Valley Community College, and in 2021 earned a Ph.D. in English Education from Columbia University, Teachers College. She is a member of the North Hunterdon-Voorhees Intellectual Freedom Fighters and serves on the steering committee for the Hunterdon County Anti-Racism Coalition.
PrevSocial Media Disinformation Is A Threat to Democracy, And You Can Help Fight It
The Republican Party Is Unpopular and It Knows It. That’s DangerousNext